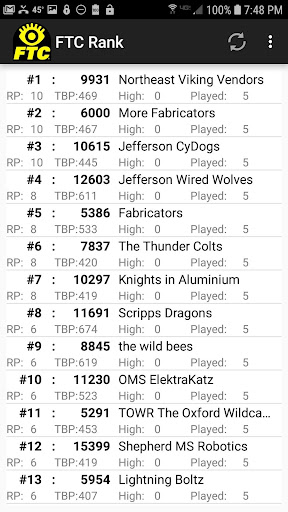 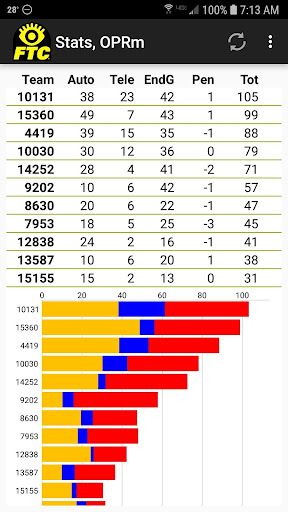 Description of Event Viewer for FTC

Features:
. See full match results and match forecasts for unplayed matches.
. See official FTC team rankings, and RP forecasts.
. See charts of overall OPRm (full and by sub-score) and of team-specific per-match OPRm-based scoring estimates.
. Select one or more teams to follow by long-clicking their name on the “FTC Rank” screen, and see those teams highlighted in all screens.
. See a team-only screen by tapping on a team name. This shows the team’s ranking and a list of matches for only that team.
. See a match details screen by tapping on a match. This shows the Autonomous, Teleop, Endgame, and Penalty breakdown of scoring for the match, if the Match Details page is used.
. See stats on the Stats screen and menu.

Provides statistics for teams, including:
. OPRm (MMSE-OPR): like OPR but works when only a few matches have been played too.
. Expected Ranking Points (eRP): RP forecast like a forecast of end-of-event rankings.
. Schedule Win Differential (SWD): # of wins a team gained by having a lucky match schedule. + = lucky, – = unlucky.
4.1 Added non-penalty OPRm (called “NP” in the app)
. NP may better measure team offensive strength given the substantial penalties being called in Skystone affecting traditional OPRm stats