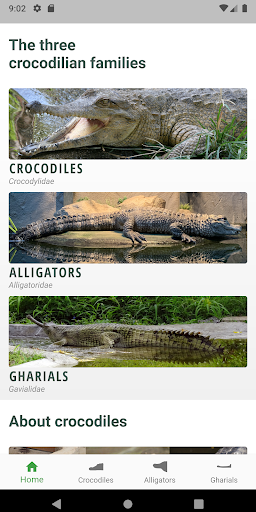 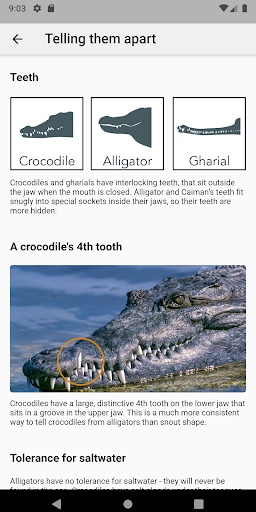 Did you know there are 25 species of crocodilian? And that’s only the ones who are formally recognized. There are plenty more hiding away in remote areas of the world. Crocodilians with particularly large heads, extra scales behind their eyes or more bony body armor than other members of their species.

Reptilian communication, biology, conservation, behavior and more are explored in our comprehensive, scientific and accessible app about the world’s oldest living reptiles.

This app is one of the first places that clearly and simply lays out crocodilian classification and taxonomy. Starting with the 3 families (crocodile, alligator, gharial), you can explore the different genera in each. Learn how to differentiate not only caiman species but also the three caiman genera.

With all content viewable offline, you can remind yourself of the differences between crocodilians when you’re deep in the jungle. (Or just anywhere that doesn’t have Wi-Fi). There’s also audio playback of these prehistoric creatures communicating with each other. Just in case you’d forgotten what an alligator hissing sounds like.

With beautiful imagery, key facts and clear navigation you can learn the differences between these endangered animals. Want to know how to tell a false gharial from an Indian gharial? Both are long crocodilians with very slim snouts…For each species we’ve listed the other crocodilians that live near it or share common features and how to tell the difference.

Each animal also has a story. Which country is it from? Who else lives there? What do the people think about their scaly neighbors? Do they hunt them? Eat them? Avoid them? Revere them? What are the myths and legends around each animal?

And what about the creatures themselves? What do they look like? How do they act? What’s the difference between an American and a Cuban crocodile? And how can you tell them apart from caimans? For that matter, how can you tell the caimans apart? There are 6 separate species of them.

Conservation issues, threats and protection measures are also discussed. This order is also becoming increasingly threatened. Around a third of all crocodilians are listed as Critically Endangered species. Read about the specific threats that each animal faces and the work that conservationists are doing to protect them. There are heartbreaking stories like that of the Indian gharial. There are also happier ones like the fantastic work that Philippine conservation charities are doing for their crocodiles.

More from The Usual (UK)